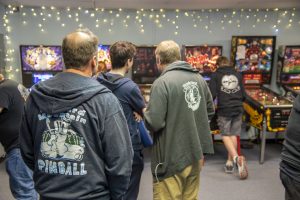 2nd Sunday of each month, 5pm start! Open to all!

1st Saturday (every other month), 5pm start! (Check out our Facebook Events for exact dates!)

We’re happy to be hosting bi-monthly women’s only tournaments! Like our monthly open flipper frenzy, the women’s tournament is also a $5 entry plus cost of games played, with 100% of entry fees paid out in prizes! (Tournament players get 20% off gameplay for the night!) Women’s tournaments are a great way to familiarize yourself with pinball events and to meet some wonderful women who also love pinball! Just by playing in the tournament, you will become a world-ranked pinball player with the International Flipper Pinball Association (IFPA) and will earn Women’s WPPRs (World Pinball Player Ranking points).

Our next league starts April 11th! (Join anytime through May 9th, and you can still be eligible to play in the league playoffs at the end of June!) We’d be happy to explain how the league works, and the league players would love to tell you all about it too! It’s a great way to meet some wonderful people, and to learn a lot about the games and pick up new flipper skills!

Info for our league:  Dues are $40 (plus cost of games played), and league players will get 20% off gameplay for the night! The $40 will go into a prize pool to be awarded after the final playoff night.

(Please note the finals may be delayed if we have to cancel a week due to weather.)

Here’s how it works: on each league night, we will play 5 games in 3- or 4-player groups. 1st place on a game gets you 4 points, 2nd gets you 3, etc. After each week we recalculate your average and the next week you’ll play against others with a similar average. This will continue for 10 weeks. For the finals playoff on 6/27, we’ll take the top players and put them in the A division, everyone else will be in B division. Prize money will be divvied up between the two divisions so everyone will have a chance to win!

This league WILL be IFPA sanctioned. You only need to be here for 6 of the 10 weeks to qualify for finals. Note that if you make all 10 weeks, you’ll drop 2 of your worst weeks for seeding in the finals. Attending 9 of the 10 weeks will drop 1, 8 or fewer weeks won’t drop any. (We will not hold league on Memorial Day.) 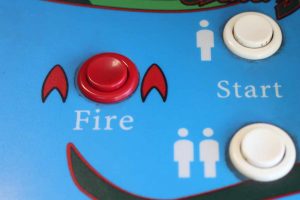 We are really looking forward to hosting the league again!  Pinball leagues are fun for all ages and skill levels.  Learn how to be a better player! Learn strategies to play your favorite games even better!  We hope to see you here!